One of the hidden gems of St Andrews, and one of the best gardens in Scotland. The Original Botanic Garden was founded by the University of St Andrews in 1889, a modest quarter of an acre in size. By 1960 the gardens had grown to 7.8 acres, when the land was required for 'other purposes'. The University acquired two fields in the early 1960s more than doubling the size of the gardens to 18.5 acres allowing for considerable expansion of the collection.

The aim at St Andrews Botanic Garden continues to be to create not only an amenity in which to relax and enjoy the beauty and atmosphere, but also to provide a scientific garden for teaching and research purposes. The situation, topography and soil conditions dictate the design of a garden.

The Gardens:-
The Heath Garden - The heath garden contains a wide range of heaths and heathers to give flowering all year round.

The Herbaceous Borders - The herbaceous and island borders come into their own in midsummer and give a dazzling display lasting till the frosts of autumn.

Order Beds - are laid out according to the Cronquist classification.

Rock Garden - In spring contains a large collection of alpine plants - they come from the world's highest places and include some Scottish species.

Water Garden - comprises a series of falls, pools and ponds starting in the rock garden.

St Andrews Botanic Garden Glass Houses:-
The glasshouse area contains seven sections, the plants in the glasshouses would not otherwise flourish in the climate of St Andrews.

Alpine - plants grow here unblemished by inclement weather and mud-splash. Other species grow here which can withstand low temperatures but do not survive our wet winters.

Cool House - displays winter and spring-flowering species of Camellia and rhododendrons from the Maddeni, the central and south-west borders are predominantly south-east Asia, a region well known for its wealth of plants.

Mediterranean - The predominant feature in this glasshouse is a ceramic panel called 'Homage to Paxton' created by local artist and sculptor, Anne Lightwood. The plant collection is being developed to show the similarities between the six geographic zones which have a Mediterranean climate - Mediterranean, California, Central Chile, Cape Province and south west and south-east tips of Australia.

The Orchid House - Contains both terrestrial and epiphytic species and varieties, set among a wide range of plants to display the various growth forms.
The Succulents House - This house is planted geographically. The New World (North, Central and South America) The Old World (predominantly Africa, Madeira and the Canary Islands) to the west. The Americas.

The Herb Garden - designed in the format of the Scottish flag - The Saltire - with emphasis on medieval herbs of the 15th and 16th centuries.

Special collections - have been developed over the years for research projects and many are still extant.

The St Andrews Botanic Garden is recognised and registered by the International Union for the Conservation of Nature, and botanical and horticultural education is of prime importance. 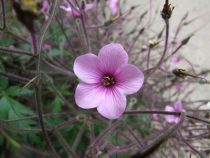